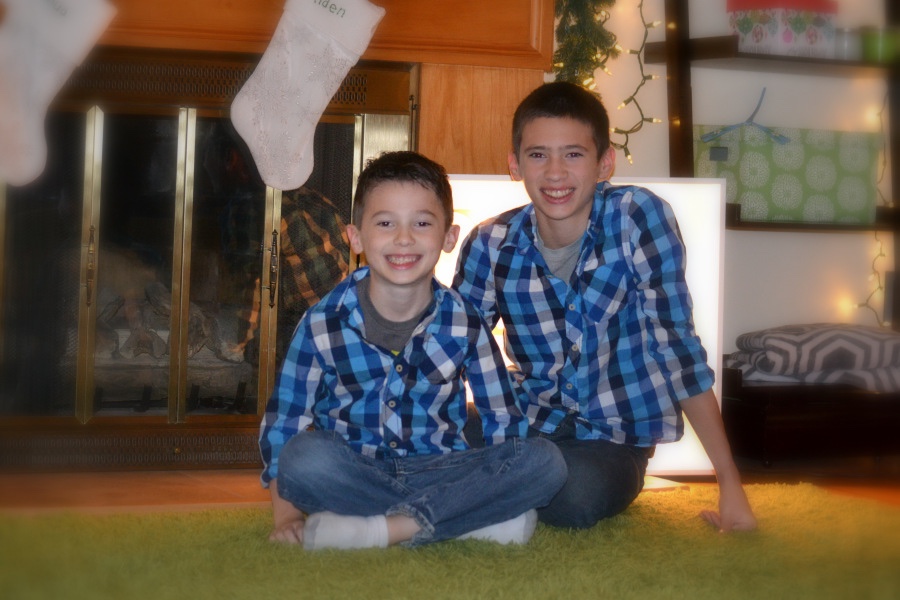 This story is two years old. I found it earlier this week and it made me smile. Hope it does the same for you.

Don’t be fooled.  This is a great picture of my boys in matching shirts.  Before school starts each year, Josh and I go back to school shopping.  It’s a tradition that the two of us have shared together for nine years now.  This past year, while we were shopping, he wanted Aiden to have the same shirt as the one he was getting.  I found it odd that my junior high son wanted his much younger brother to be dressed as his “twin”.  I kept my thoughts to myself and decided to enjoy what might be the last time that he actually wanted to share something with his little brother.  These are those shirts that we bought that day.

For the past 20 years, I have always made it a priority to send out Christmas cards.  I absolutely love to make the card and hand write a small message on each one.  At times, life has become so busy that I have thought about skipping it.  But each year, I spend countless hours making sure the card is exactly how I want it to look.  I will always treasure each card and each person or family member that I have sent them too.

We have been so blessed this year.  I try to remember to thank God every day for all of my blessings but this year I have never been so thankful.  Ben and I took a trip of a lifetime to Italy.  I never thought I would be so lucky but those memories will last me the rest of my life.  The kids have made us so proud again this year.  They are both independent boys who have good grades and make good choices.  They have a love for playing soccer and are now throwing basketball into the mix.  Two years ago, Ben and I took a huge risk; he quit his job to take a chance to get into a school where the odds were not in his favor.  This year he was accepted.  It wasn’t easy, he worked like crazy but all of his time and effort paid off.  He still has a long way to go but he is headed in the right direction.

So…being that we are so blessed, I wanted to send out a Christmas card that would reflect all of our joy.  Easier said than done.  I have been on a huge budget kick this year.  We have always been good with our money but, being that we are going to have Ben in college the next couple of years, we have been trying to cut out expenses that aren’t absolutely necessary.  I decided that instead of having someone take our pictures, that I would take a picture of the boys instead.  How hard could it be?

About a week ago, while Ben was at work, I told the boys that we were going to take their picture for the Christmas cards.  I told them if they cooperated and, if they didn’t complain about it, we could go and get ice cream.  You would think,  from the picture above, that we all shared a nice evening ending with a scoop of our favorite ice cream.  You would be wrong.

My boys are very different.  Josh is a perfectionist.  When he heard the plan, he quickly decided they would wear their matching shirts.  Eager for ice cream, he took off his everyday go-to soccer pants and t-shirt and looked for a pair of jeans that fit him just right.  He was disappointed that the jeans he hardly ever wears were too short and refused to get his picture taken in them.  I assured him that nobody would be able to tell they were two inches too short.  He refused to hear me.  We found another pair that he insisted were too big.  He started rummaging through the closet for a belt.  I reminded him that he was only going to have them on for a few minutes.  I promised him that they wouldn’t fall down. He ignored me and felt pleased with himself when he found the belt to complete his outfit.

Meanwhile, Aiden is my whimsy.  He is a goofball.  While Josh was rummaging closets for a belt, Aiden was putting on a Harry Potter tie under his dress shirt.  Now remember the dress shirt is blue plaid and the Gryffindor colors are maroon and gold.  Aiden doesn’t care.  He thinks its funny.  He pulls out a pair of jeans with holes in the knees that are also two inches too short.  He is okay with this.

Josh spies Aiden’s choice of accessories and jeans and immediately gets mad at him.  “Aiden, take off that tie! It doesn’t even match and you can’t wear those jeans!”  I side with Josh and we find Aiden a pair of jeans without holes.  After they are mirror images of each other,  we proceed into the living room for the “perfect” shot of my “perfect” kids.

I had them sit down for a quick shot to check my lighting.  I felt like the background was too cluttered so I wanted to find another spot that wasn’t so busy.  While we were moving the furniture, it all went downhill quickly.

Aiden got the Harry Potter tie back out and started goofing around again.  I found it kinda funny, so I snapped a few shots of him.  While Aiden was being silly, Josh helped me clear the furniture and find a good spot for the photo.  Josh is always happy to help me and made sure everything is just right.  When we were finally ready to try another shot, Aiden indicated that he had no intention of taking that tie back off.  Josh lost his patience once again.  He wasn’t going to be in the picture with him looking like that.  At first I agreed.  I told Aiden that Josh was right, it didn’t match. I asked him to take it off and we would take a few of him with it on later. But he got upset, like we hurt his feelings.

I felt his pain.  I told Josh that if Aiden wanted to wear the tie we should let him wear the tie.  I admitted that it was kinda funny and that it portrayed who Aiden really was. But Josh didn’t see the humor in it.  Josh said that Aiden was too over the top and refused any picture with him acting like that.  I now have one child crying and one really angry kid (Aiden and I call him crabby teenager when he is out of earshot). I am starting to get irritated myself.  I tell them that they might as well put everything back.  We wouldn’t want these pictures anyway because, even if we could get a shot now, that this is not the memory we want to look back on.  Aiden looks up and says “Are we done? can we go get ice cream now?”

We all sat on the floor in silence, lost in our own thoughts. I thought about how stupid this was.  I decided that this picture wasn’t worth the drama and tried to lighten the mood. I said “Hey Josh”, he pulled his hand away from his head and I said “fart”.  Instant smiles from both of them.  All you have to say to a boy is poop or fart or butt and they smile.

Part of the disaster was they each were wanting something different out of these pictures. And they are…different. So, I decided to take a picture of each of them by themselves.  One that captures the uniqueness of  each of them. I still didn’t get them ice cream.  A deal is a deal.

That night, I sat down to create our yearly family Christmas card.  As I looked at all of the shots, I realized that I had the perfect picture in my very first shot.  But it wasn’t enough for me.  I pushed the limits.  I asked too much of them. I stole their joy.  As I sat there looking at the pictures of these boys that I love with all of my heart, I decided that I wasn’t sending out cards this year.  Not because I am too busy, or because all of you aren’t worth my time.  It’s because I don’t want to spend hours working on sending the “perfect” card when I can spend hours enjoying these boys.  I can sit and enjoy their individual personalities while they are still here with me.

I updated my Christmas card list anyway.  I took off a family member who passed away and added new friends that I have met this year.  I thought about each and every one of you and how special and unique each of you are to me. Enjoy your families this holiday.

Merry Christmas from the Glasers. 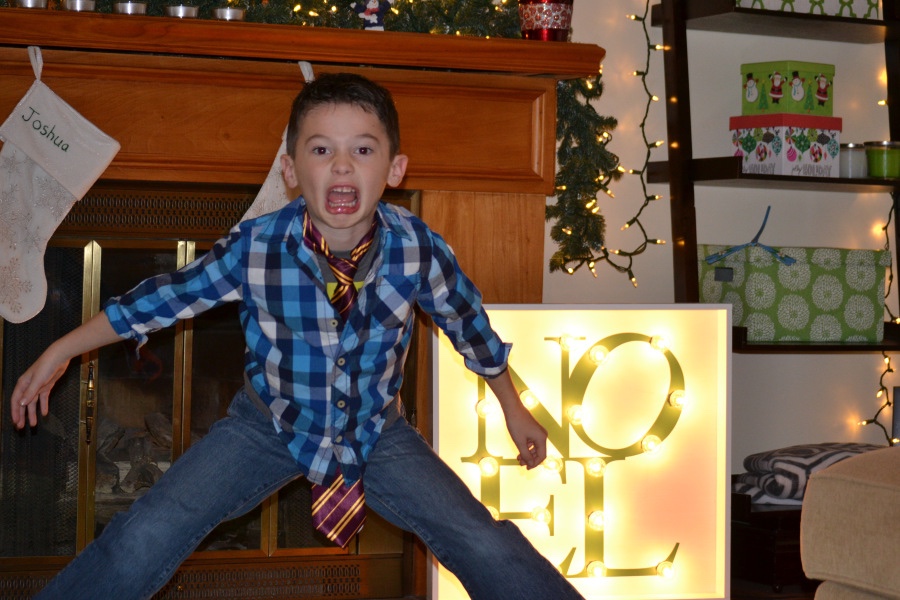 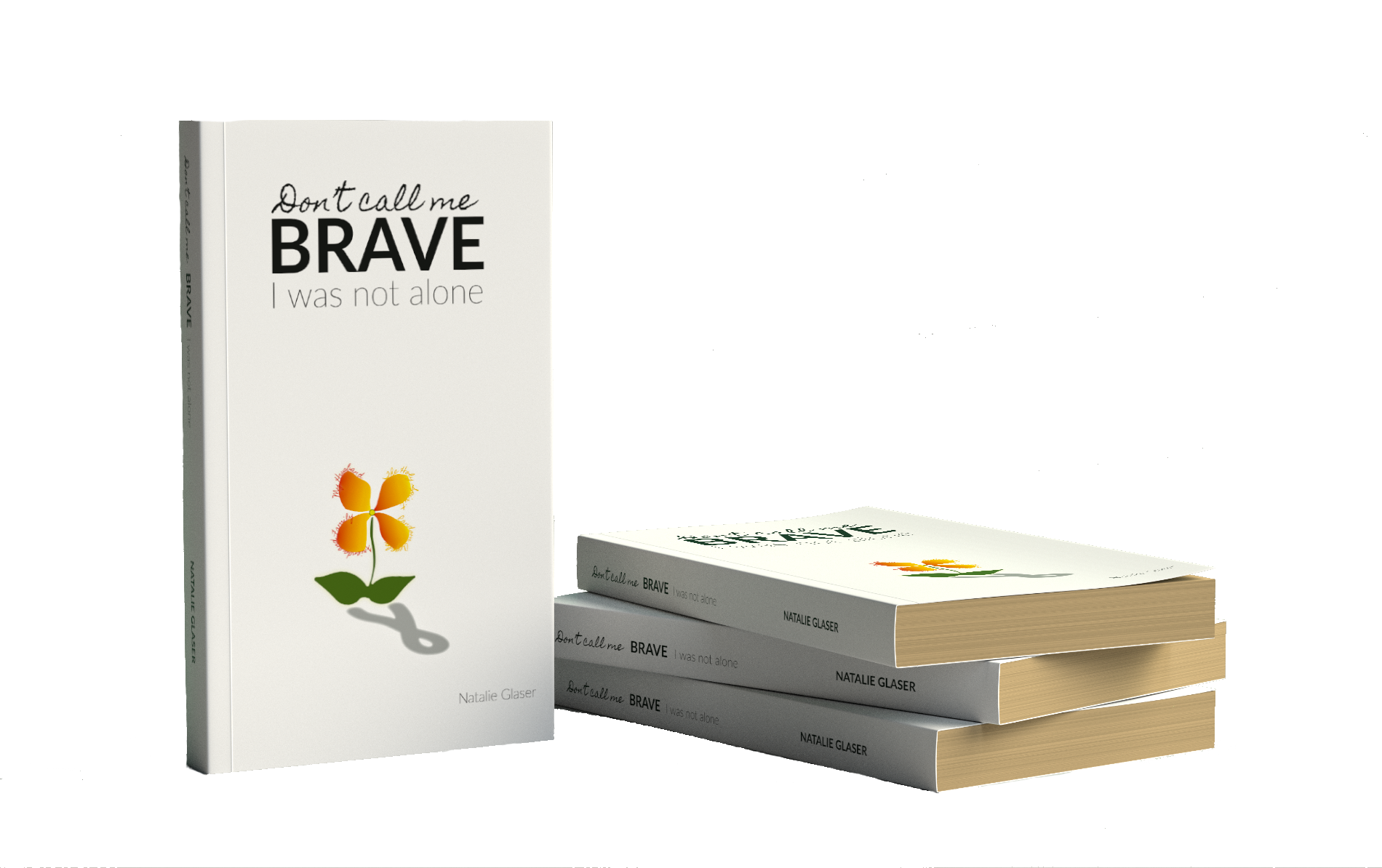