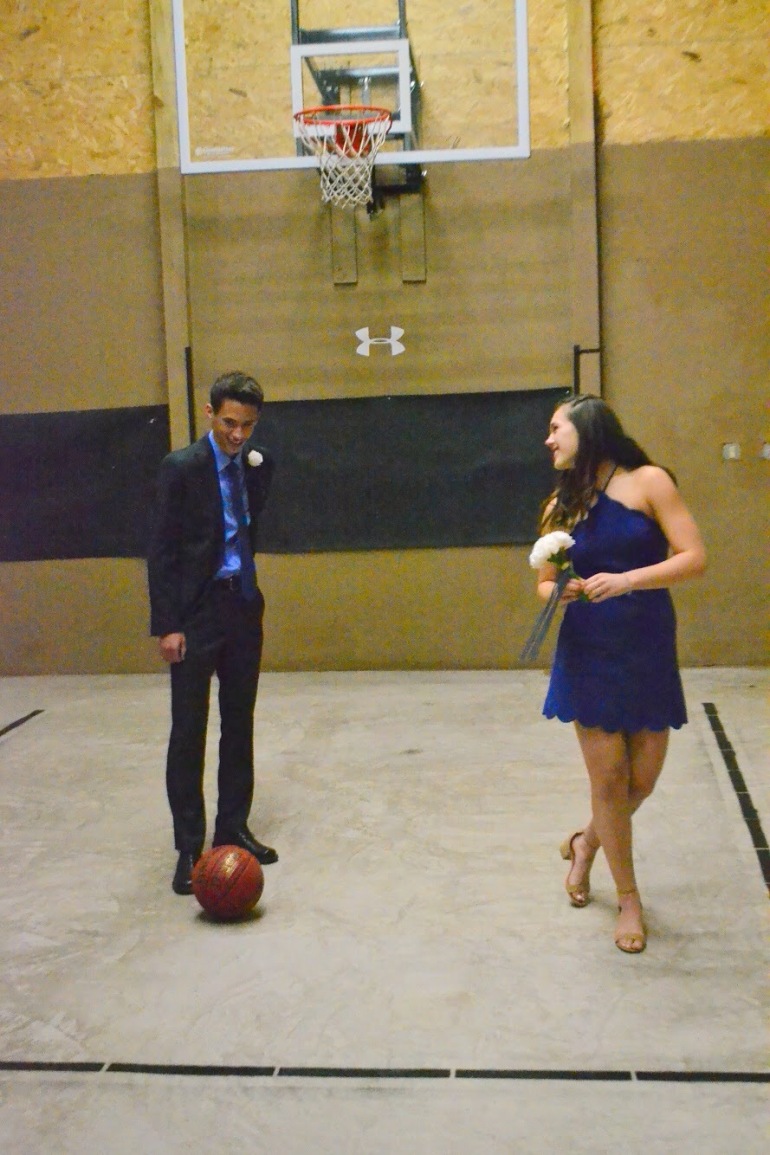 This is a non-traditional homecoming picture.  I love it so much.  There are no fake smiles.  Just a girl with the basketball that she is so comfortable with and a boy pretending that it is a soccer ball.  Look at their smiles!

When Josh told me that he was planning on asking Hope to the Homecoming Dance this year, my mind flashed back 25 years ago. I immediately became nervous for him.

We all have those moments in life that shake us, change us, define us for years to come. Homecoming was one of those life altering times in my life. The word still to this day brings back memories of adolescent insecurities.

I still can hear my name over the loudspeaker…Natalie Peters. I couldn’t believe it when I heard it. Why would my peers nominate me?  Nobody even liked me. I didn’t have many close friends. I had my best friend Samantha but surely, they didn’t allow her to vote more than once.

The buzzer signaled to move to the next class and I was attacked from behind from the other, more popular girls, screaming and laughing and hugging me. I was confused. Were they happy for me?

All of the girls were from the “popular” crowd. They planned on celebrating by going out to dinner with the entire court. I know it wasn’t intentional, but they inadvertently forgot to tell me where and when. Imagine my surprise when I heard about all of the fun they had the next day, my escort included.

I cried to my best friend who never cared about what others thought of her. She consoled me as she always does.  I didn’t know it at the time but all you really need in life is one good friend.

I ended up winning Homecoming Queen that year. Instead of being overjoyed I always thought in the back of my mind they voted for me because they felt sorry for me. I know now that isn’t the case but at 17 you think the world is out to get you.

Fast forward 25 years and I’m completely asked to be included in Homecoming.  This 15-year-old boy of mine chose to include me and I love him so much for it.

Josh told me he needed to make a sign to ask Hope.  I questioned why the big ordeal but that’s how it’s done nowadays. He said he would make it simple and asked me to help. I was excited thinking he would let me color, but he had no intention of letting me.  I was just there for moral support.

I drove him to Hope’s house to deliver the sign. We were greeted by a beautiful girl who didn’t appear as nervous as I would have if it were me at that same age.  We were invited inside and spent about an hour getting to know her and her mother and sister. I felt instantly connected to them. Josh had made a great choice.

Now he needed a suit…he had grown so much over the past year.  We waited until the week before (a boy doesn’t worry about these kind of things).  There are slim pickings in Indiana – thank God for JC Penny.  I knew that this would probably be the only time he would fit into the suit, so I declared we would get items from the clearance racks.  He is a bargain shopper like me, so he agreed it made sense.

We spent two hours going back and forth trying to find pants that looked like they belonged to the jacket and a shirt and tie to match both the suit and Hope’s dress. We laughed so hard as he tried on white coats, plaid coats…old men coats.

When I saw the sign for shirts that said buy one get one free, I excitedly told him I was going to ask a random stranger to split it with us. He shook his head and told me that I was taking my cheapness to a whole new level. He wasn’t taking part in that one.

I didn’t listen, I headed over to find someone anyway.  Luck was on my side…I actually knew the family and they were thankful they didn’t have to pay full price either.

We now needed a bouquet…we are on a roll…I tell Josh we are going to make it. He laughs and agrees as he knows I will win. We pick out a beautiful set of fake white roses. We have Ben tie together and glue a blue ribbon to match her dress and voila…a $5 bouquet.  Sorry Hope…it’s not that we don’t think your worth it, it’s that we (I) love the challenge of finding the best price.

He tells us we are meeting at her Dad’s house at 6:30.  I smile as he starts getting ready at 5:30 (he hates to be late).  I can’t believe how calm he seems and how tall he has grown. I’m so proud of him. I want to remember this forever.  I snap a picture of Ben swooping in and helping with the final touches like he always does.

We head to her Dad’s and (in my true style) are late. Josh walks confidently up the sidewalk and he knocks. The door is opened by a simply beautiful girl named Hope.  She seems wise beyond her years. I sense she doesn’t get wrapped up in all the drama I did as a young girl. I pray quickly that they never have to feel like I did. I hope they know how much God loves them and it never matters what other think as long as they are doing right by Him.

Her Mom pulled me aside and whispered that she prayed earlier that they would have a good time and suddenly a ladybug appeared. 🐞 God knows I’m a sucker for ladybugs.

We snapped a few more pictures and dropped them off to have fun with their friends. They were good sports about all the pictures we made them take.  This is one of my favorites….her sister and his brother. 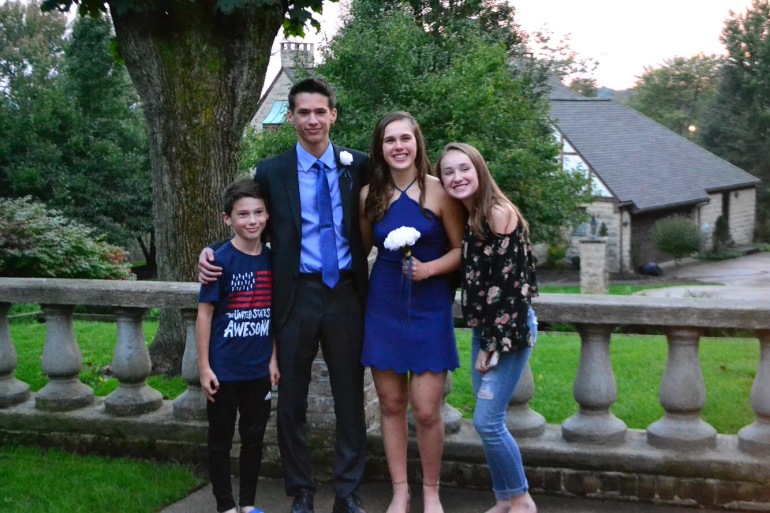 I’m going to leave you with this.  If you had a bad week…felt like you’d dropped the ball one too many times…I’m pretty sure you are going to feel better about yourself after you hear this.

Hope’s Mom said she would pick the kids up after the dance and take a few of them back to her house. She told me to pick Josh up around 12:30. I told Josh to text me when he was ready.  I laid down at 11 and made sure my ringer was on and the volume as high as it would go.

Imagine my panic when I grabbed my phone at 2 am to see a text from Josh as 12:45 asking when I was coming. My heart sank, and I think I may have cried a bit. How could I have been so irresponsible? Was he still in his suit…after all this time?  He was going to be so angry with me! I missed hearing about his night.  I abandoned him!

“Please keep sleeping… Josh is going to sleep in the basement and Hope and Anna will be upstairs. You can get him in the morning! I don’t want you driving this late tired especially with all the homecoming craziness. :)”

I quickly thanked God that he was in good hands and then started laughing.  Just as I had won the title of “Homecoming Queen” 25 years ago…I was sure to win the “Mother of HOCO 2018 Award” this year.

I joined Hope’s Mother this morning while we waited for the kids to wake.  We talked about how similar we are, and she assured me it was nothing to be embarrassed by.  Josh smiled when he saw me and said he wasn’t surprised that I fell asleep.  He assured me it was fine on the way home and again I thought about how lucky I was to be the mother of this great boy.

I believe everything happens for a reason.  This Homecoming Dance was the exact opposite of my dance 25 years ago. This time God made sure I was completely included with not only my son but my new friend as well.